From Monday 2.11 our shops are CLOSED until further notice.

‘Runners Service Lab’ was founded in 1980. 40 years later, the small electronics store in Beveren-Waas has developed into a thriving running specialist store that currently bears the name ‘runners’ lab’. 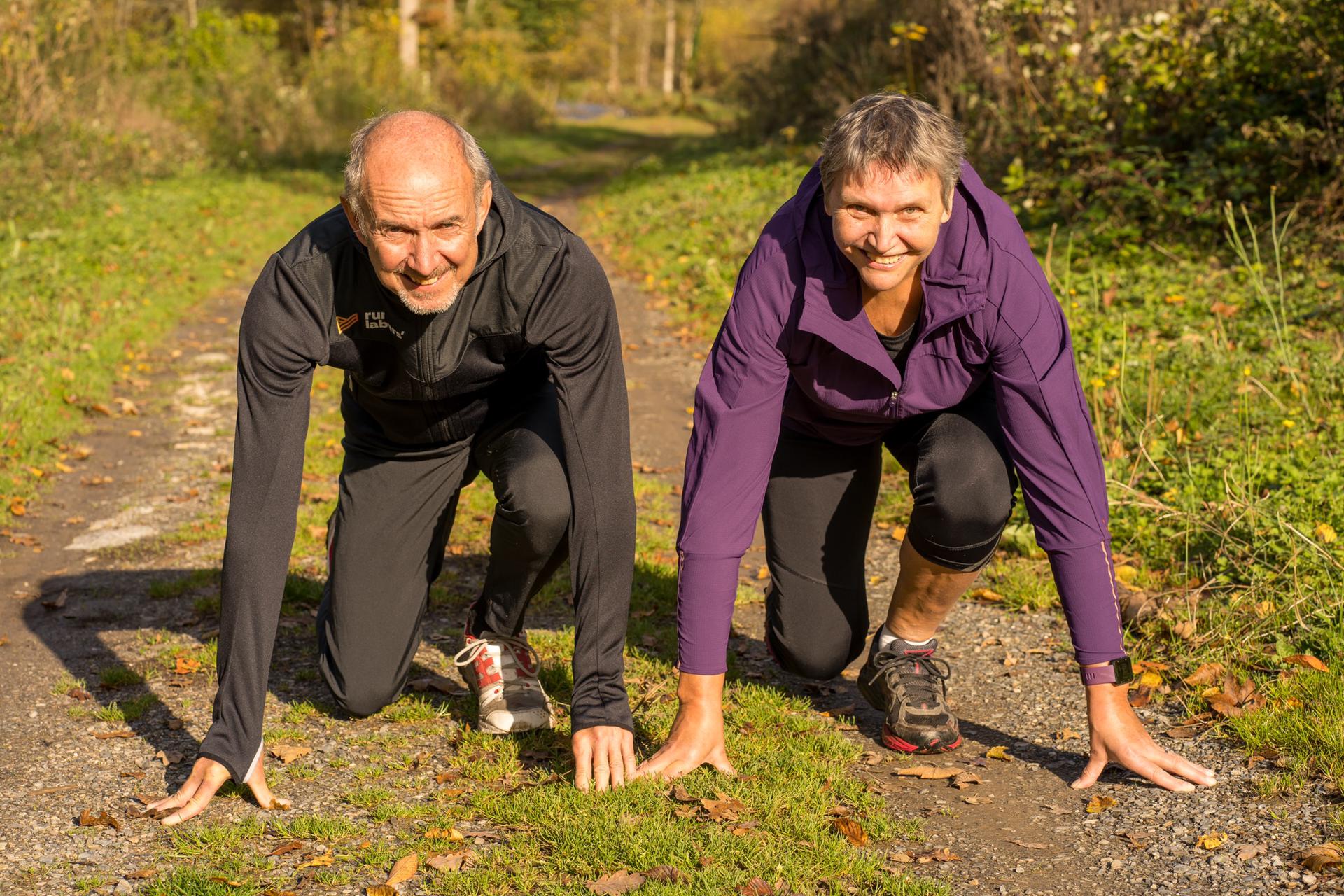 How it all started 40 years ago

Jempi Wilssens is the man and the brains behind the creation of runners' lab. Jempi, a top runner in Belgian athletics and an electrician by training, conquered the global running world with his revolutionary approach. The passion and drive with which he started his running shop are still as fiery today as they were in the beginning. It’s time to meet the founder of runners’ lab in an extensive double interview. He is joined by his wife, Lut Staut, who worked behind the scenes to help keep the company on the right track.

“In the 80s you could find all kinds of football and tennis specialist shops, but running shops weren’t commonplace at all in those days”, Jempi started about the early days of his life's work. “The big sports brands thought I was crazy when they heard I wanted to specialize in the running department. They said I was fighting a losing battle. Running was not at all established in the population at that time, you see, certainly not in Europe. I had been involved in running since I was fourteen and the urge to do something with this passion took over. I bought a shop close to the (sports) centre of Beveren and decided to focus on running shoes and accessories. As an electrician, I installed electronic equipment in the other part of the shop. The combination of the two seemed like a brilliant move, because it encouraged me to use my cameras to capture the running style of athletes on screen. All I needed was a treadmill, which I bought right away.” 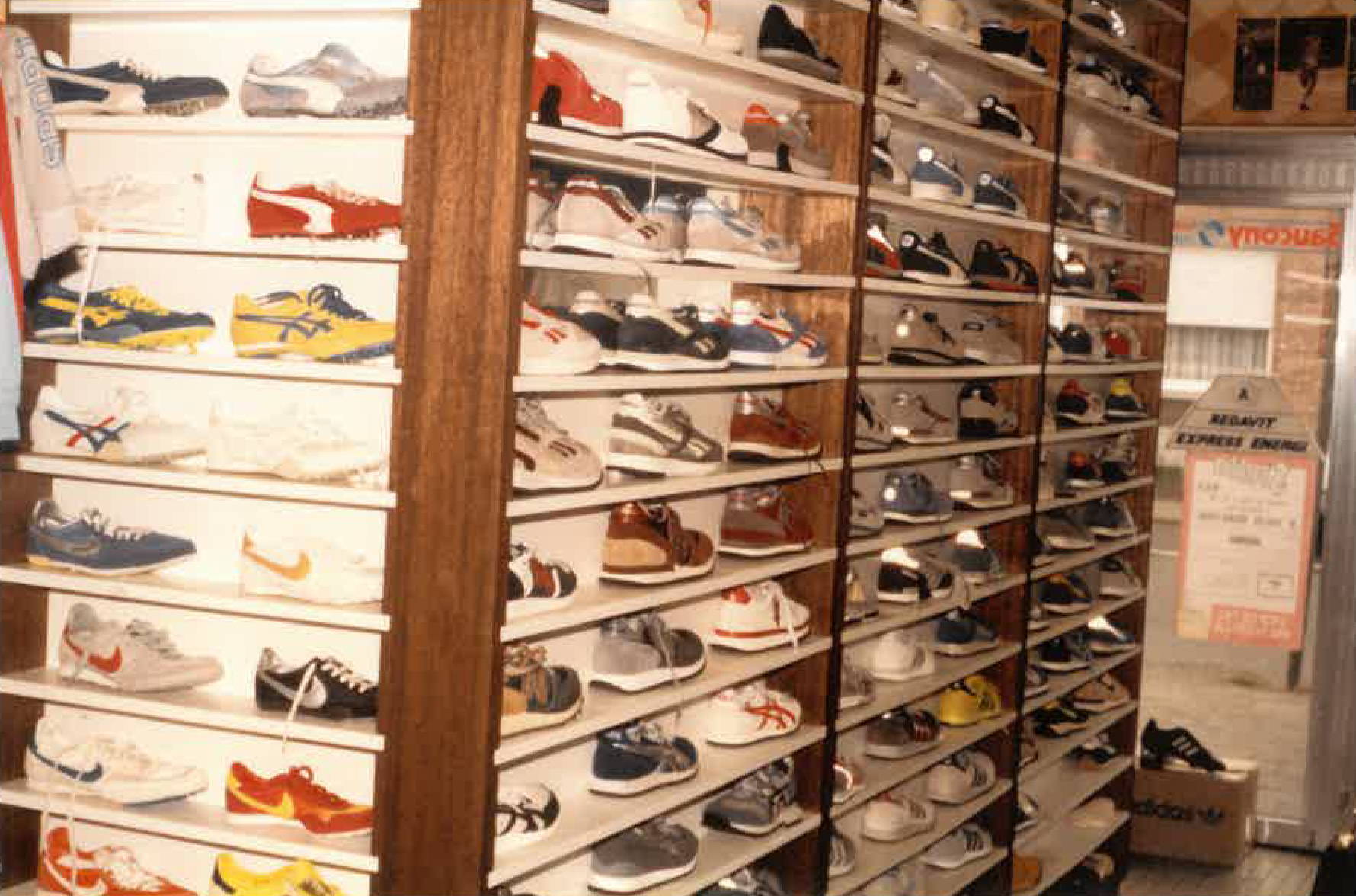 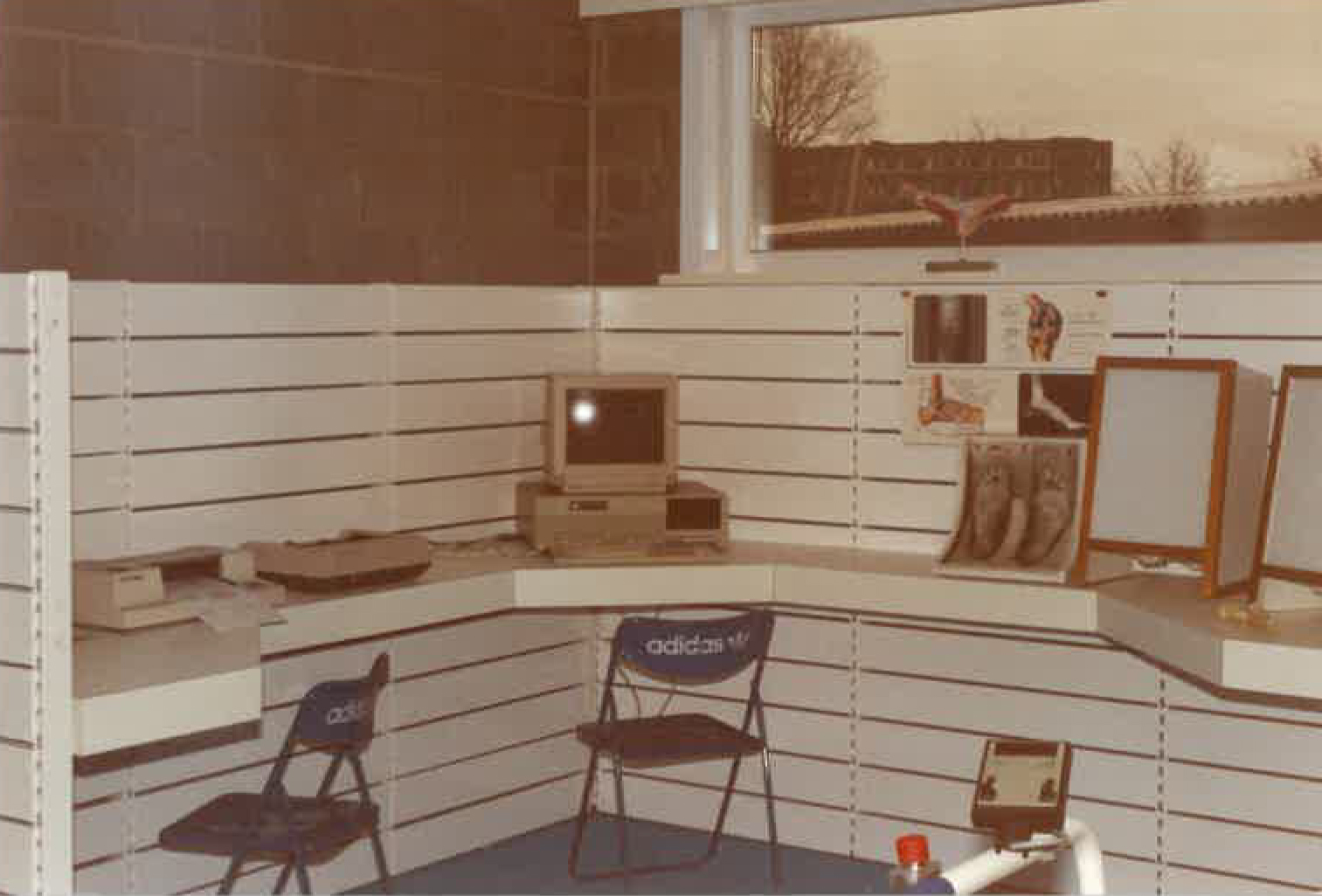 Jempi could rely on the support of his wife Lut from the start, although she did have her reservations about the entrepreneurial plans. “Just like Jempi, I felt a bond with the sport, but I was not immediately in favour of developing an independent business. I had a good job at an insurance company, which I enjoyed, so I was quite reluctant to step into the unknown. Still, I supported my husband and his plans and helped him with the paperwork after working hours.”

It didn’t take long before Jempi committed himself to help every athlete find the right running shoe. After a year, the part of the business specializing in running equipment was such a success that he decided to focus on the running speciality store full-time. Despite his already revolutionary approach by incorporating camera and treadmill, Jempi continued to innovate. His motive? Finding and tackling the cause of injuries.

“As an athlete, I was often held back by injuries. The doctor told me to stop because my body was not made for running. I was not satisfied with his reply. I started to wonder how I could help other athletes with such experiences as well. In 1980, I assembled a photocopier that would be able to determine foot types. Four years later, I went one step further by developing a first footscan® system with friends, which I later professionalized even further. That way I could visualize the dynamic pressure points. I also started studies in orthopaedics, (sports) podology and I became a biomechanic for Adidas International in 1985, the same year I bought my first shoemaker's equipment. With the extra knowledge I acquired, I then started making soles and was able to make shoe adjustments and corrective shoe inserts. That was necessary at the time due to a lack of overpronation shoes, among other things. You could say that we were one of the first companies that started the advance of specific running shoes adjusted to the runners’ particular running style. Not only did athletes find their way to our stores, hospitals and universities from all over the world were also interested in the potential we had to offer.” 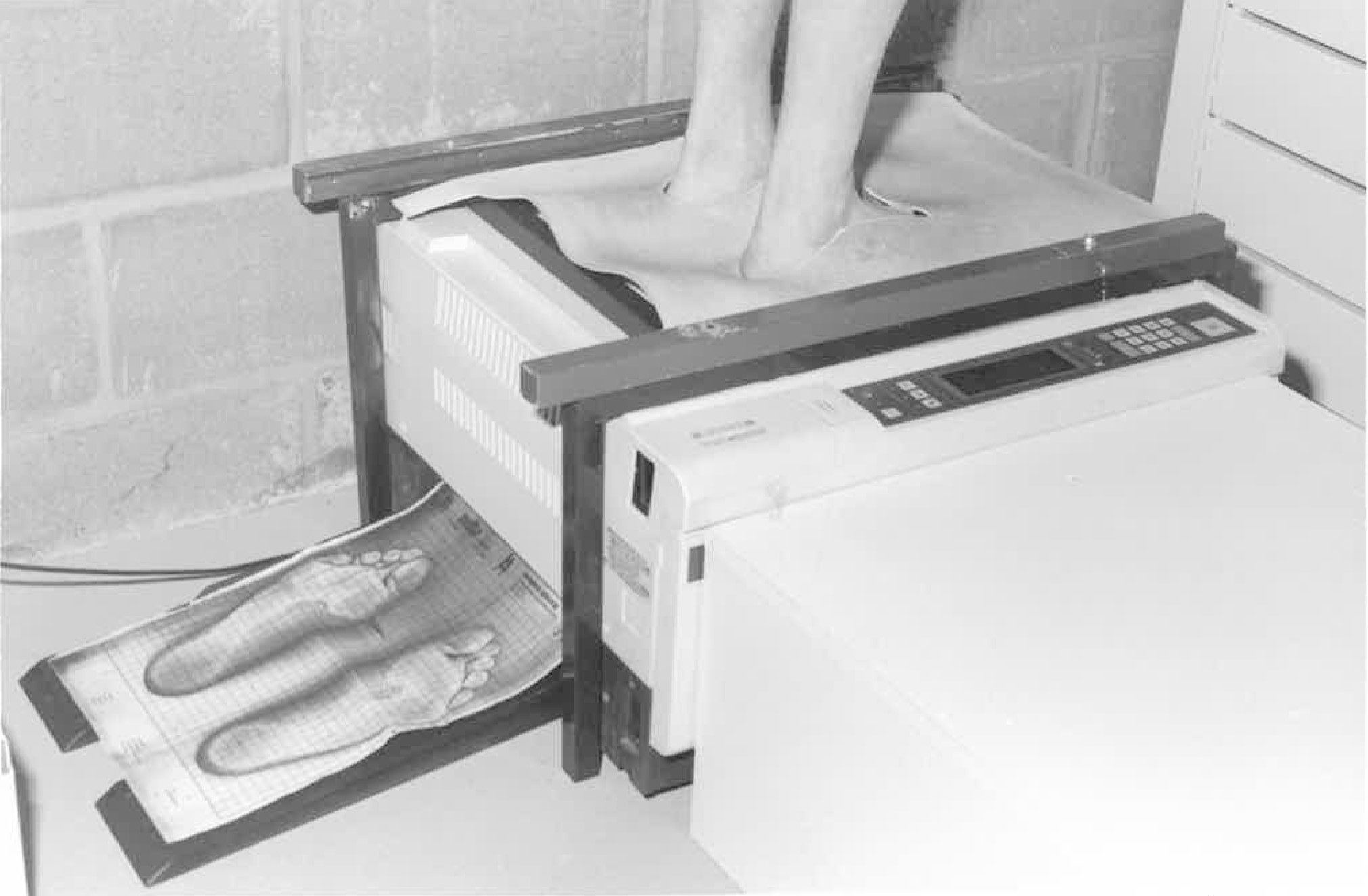 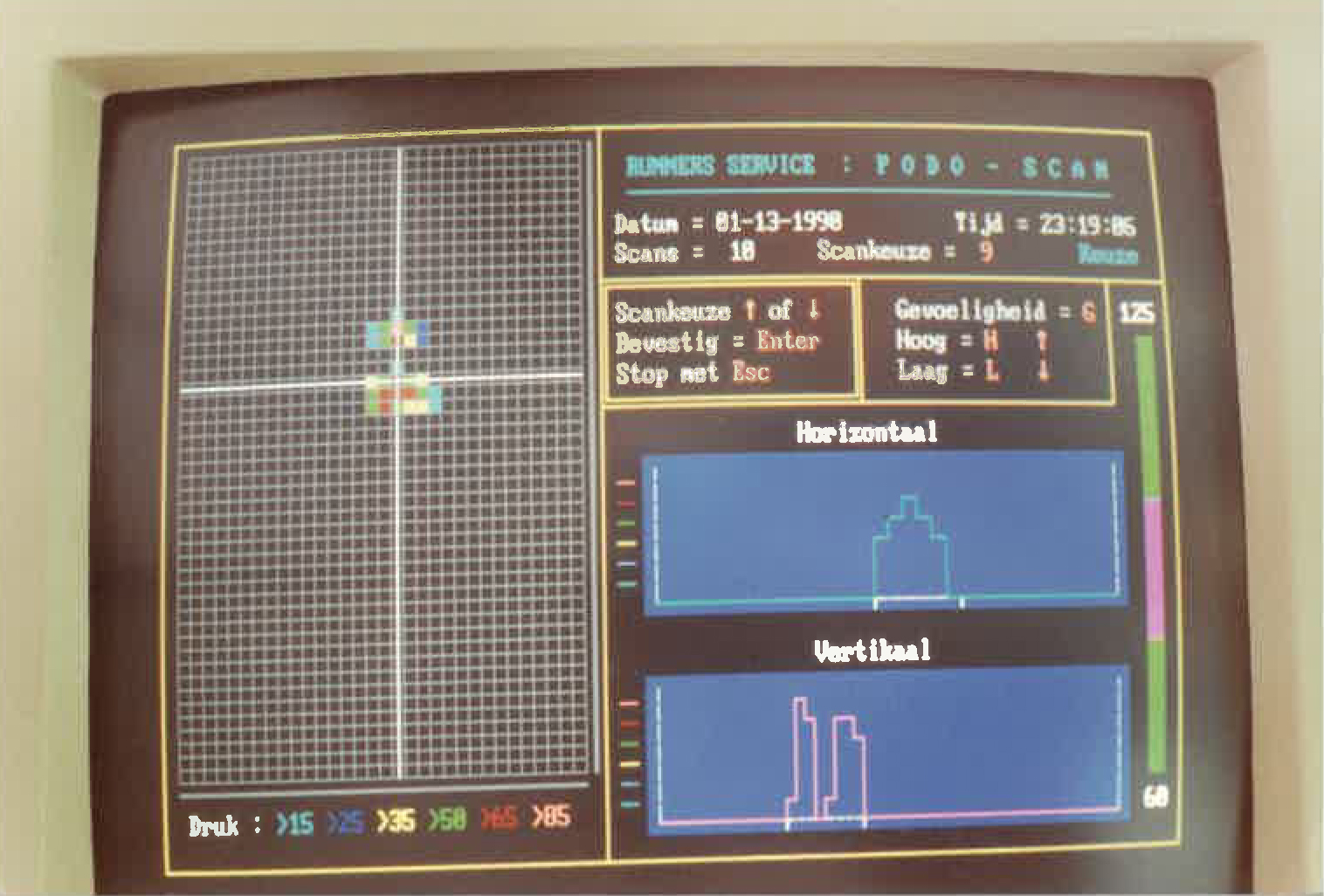 In retrospect, Jempi's progressive and inquisitive character was one of the reasons why the business flourished. Still, in the beginning, it frightened Lut. “I have to admit I was scared at first. In the first few years, I was spending almost half my wage to pay off the loans. It’s easy to get demoralized in the first few days when you only sell a pair of shoelaces worth four old Belgian francs (which equals 11 pence). We were lucky that I hadn’t quit my job in the beginning, or we would not have been able to pursue our dreams financially. Those first years were tough. We didn’t dare to take a day's leave for four years. Our shop was open every day until late in the evening and we even opened our doors on Sunday morning, solely out of fear that people would buy their running shoes elsewhere.”

World champions at our doorstep

The pressure measurement system became a major success, as did its integration in Jempi's running specialist store. Several top athletes from Belgium and abroad frequently visited our store, including even some world record holders. We still use that measurement system nowadays, by the way.

“I have always prioritized quality. Because of my passion and the high-quality products, I somehow expected the business to become a success. It may have been a leap of faith, but in life, you have to be open to taking risks, especially if you truly believe in a project. When you notice world-renowned athletes such as Paula Radcliffe or Mo Farah frequenting your store several times a year, you really feel satisfied. Then you know you have what it takes to achieve success. They told Paula Radcliffe in her teenage years that she should stop running because she would break down with her bad running style. Thanks to various measurements, we developed the right shoes and insoles for her. In combination with strengthening exercises, those shoes have contributed to her impressive track record. I am proud of that! Another example is Sifan Hassan, world champion in the 1,500m and 10,000m. When she was fourteen years old, she came to our lab because her stride length was almost longer than her body. You could see she had talent, but her running style was off. You can still slightly see it, but thanks to our measurements, her running style has improved enormously. It is rewarding to see those athletes developing and overcoming their problems. On the other hand, I get just as much satisfaction when a recreational athlete sends me a message after he was able to cover five kilometres thanks to our help, or when someone lets me know he was able to complete his first marathon. They are just as important to me as the top athletes.”

Over the years, we’ve clearly seen a shoe revolution take place and running has started booming. The store in Beveren moved to larger premises in Zwijndrecht, followed by new branches in Ghent, Paal-Beringen and Zaventem. Jempi passed the torch to his son Koen 11 years ago, but he remained involved in the company. Lut, the ‘mother hen’ of the company, who quit her job at an insurance company after a few years to assist in the business full-time, also tries to distance herself more of the business. Like Jempi, she was relieved that the business remained in the family.

“Of course, nothing goes flawlessly all the time, but in retrospect, I don't think I would have done anything differently,” Jempi continues. “I am very happy that I could pass on my life's work to Koen. I never forced him to take over my position, but it's nice that he joined the firm and was willing to take more responsibility. As a part-time professional athlete and part-time employee in the business, Koen was already regularly on the road to test athletes. The change of leadership didn’t come as a surprise, but it was a relief when he agreed to take over the company. I am glad that he is sitting in my chair now. In the meantime, I am not twiddling my thumbs either, because I am convinced that the measurement system and the shoes are still open to some improvement. The urge I have to continue improving is deeply rooted, it is in my blood. I am currently still working on 3D printing of shoes, which is the future in my opinion. I hope my experience will enable me to contribute to this project, because I think there will come a day when fully personalized shoes will see a breakthrough, especially for intensive athletes.” 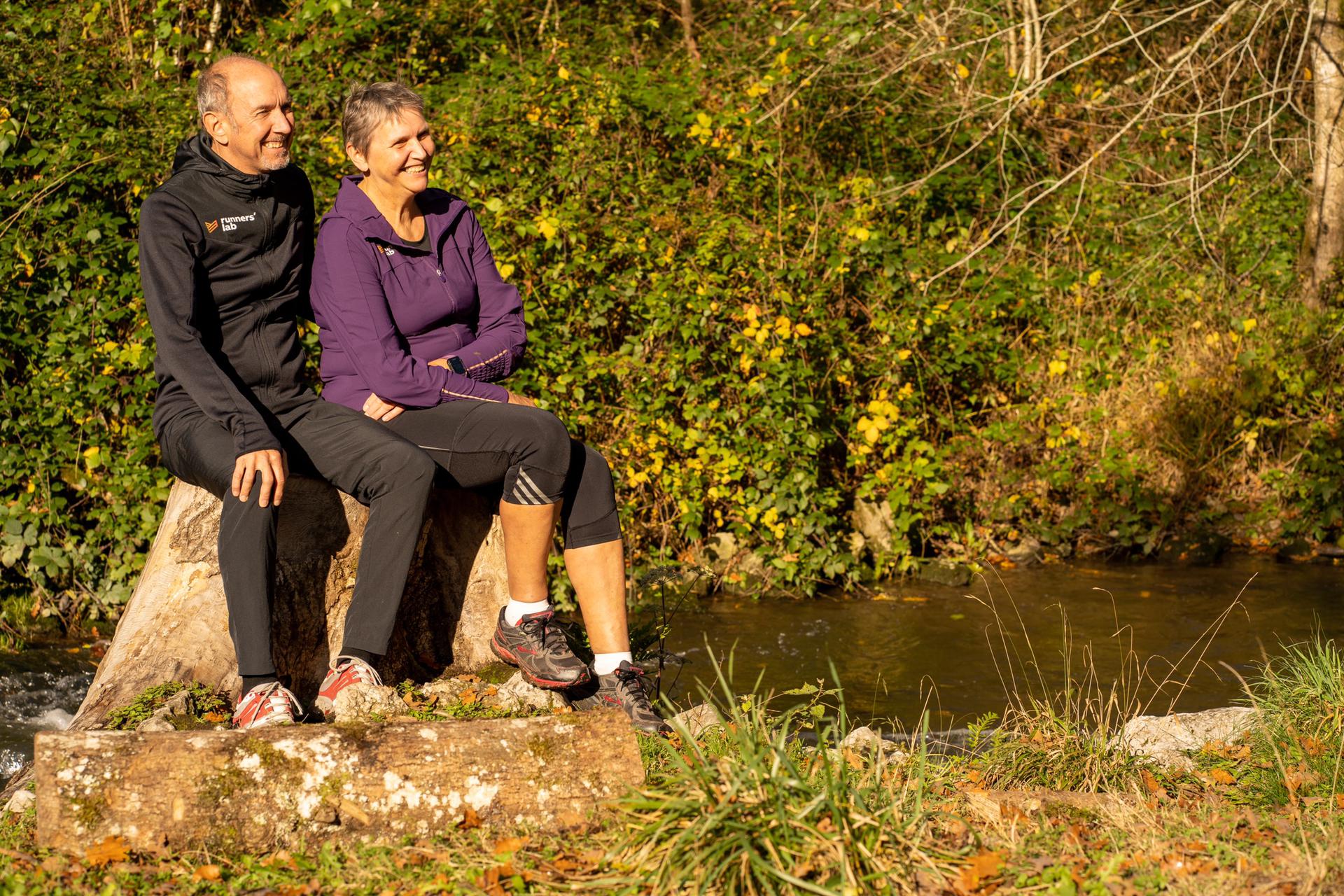 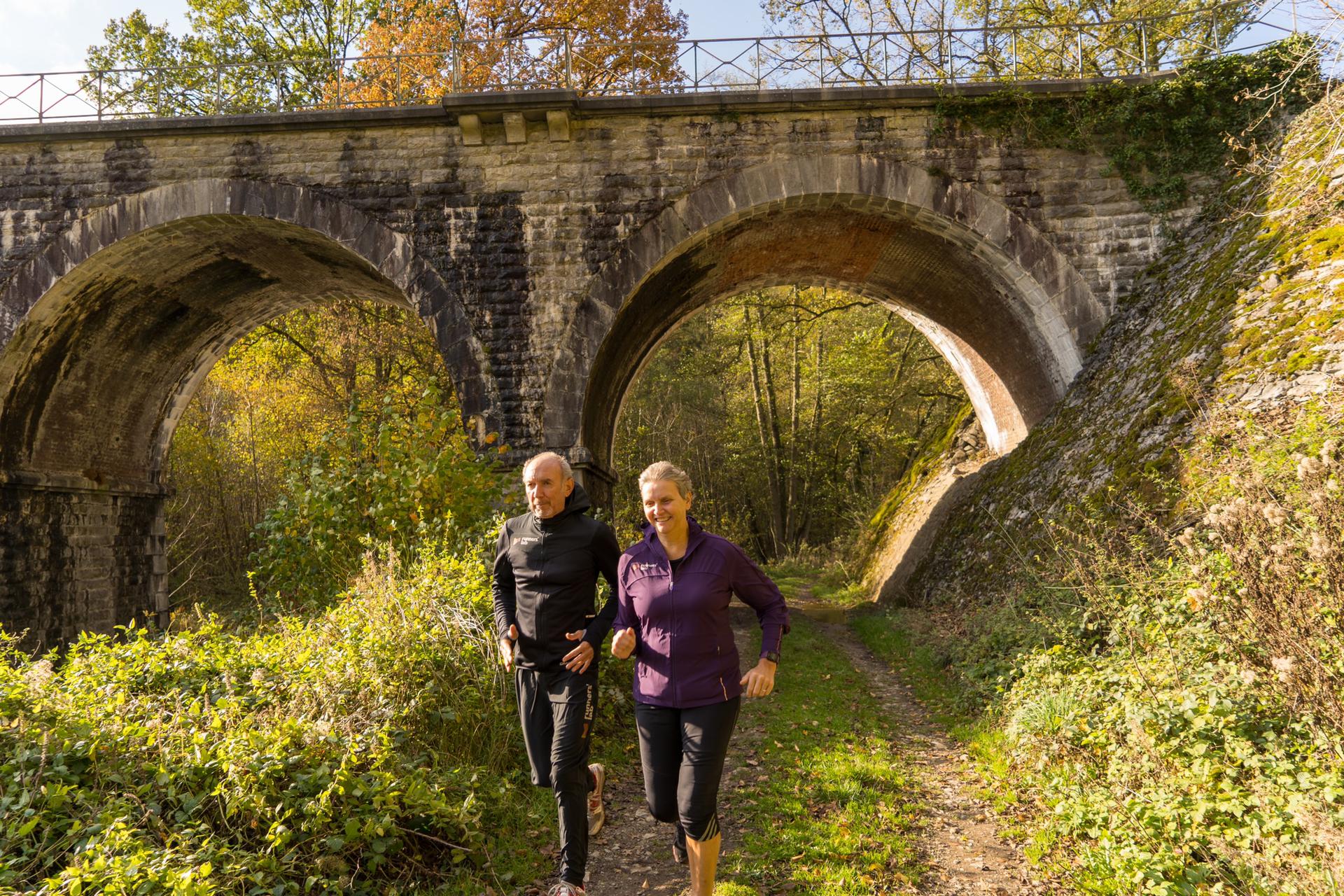 “I always expected that Koen would take over runners’ lab,” Lut adds. “Luckily, because otherwise we would probably have sold everything and that would have been the end of the store in Beveren. Personally, I did not feel the need to take over that position, so I am very happy that it remains in the family. Currently, I have handed over some of the financial tasks, which means that I am no longer present every day. I still have a bit of a hard time handing over part of our company. The contrast between the start of the business and now can hardly be much greater. In the meantime, I have really lost my heart to the cause. Even though year after year I try to distance myself more and I am announcing that I will retire in two years, I don't know if I will be able to do that. There is no longer a full-time job for me, but I still help out where I can. This can range from unpacking boxes to helping with the printing or making sure that everyone has something to eat. I enjoy doing everything that happens behind the scenes. I think I will always try to maintain the bond with runners' lab and come back regularly.”

Koen has now been the leading man of the company for 11 years. The change in power did clearly not mean a halt to the success of runners’ lab. According to Lut, Koen is the spitting image of his father on several levels. 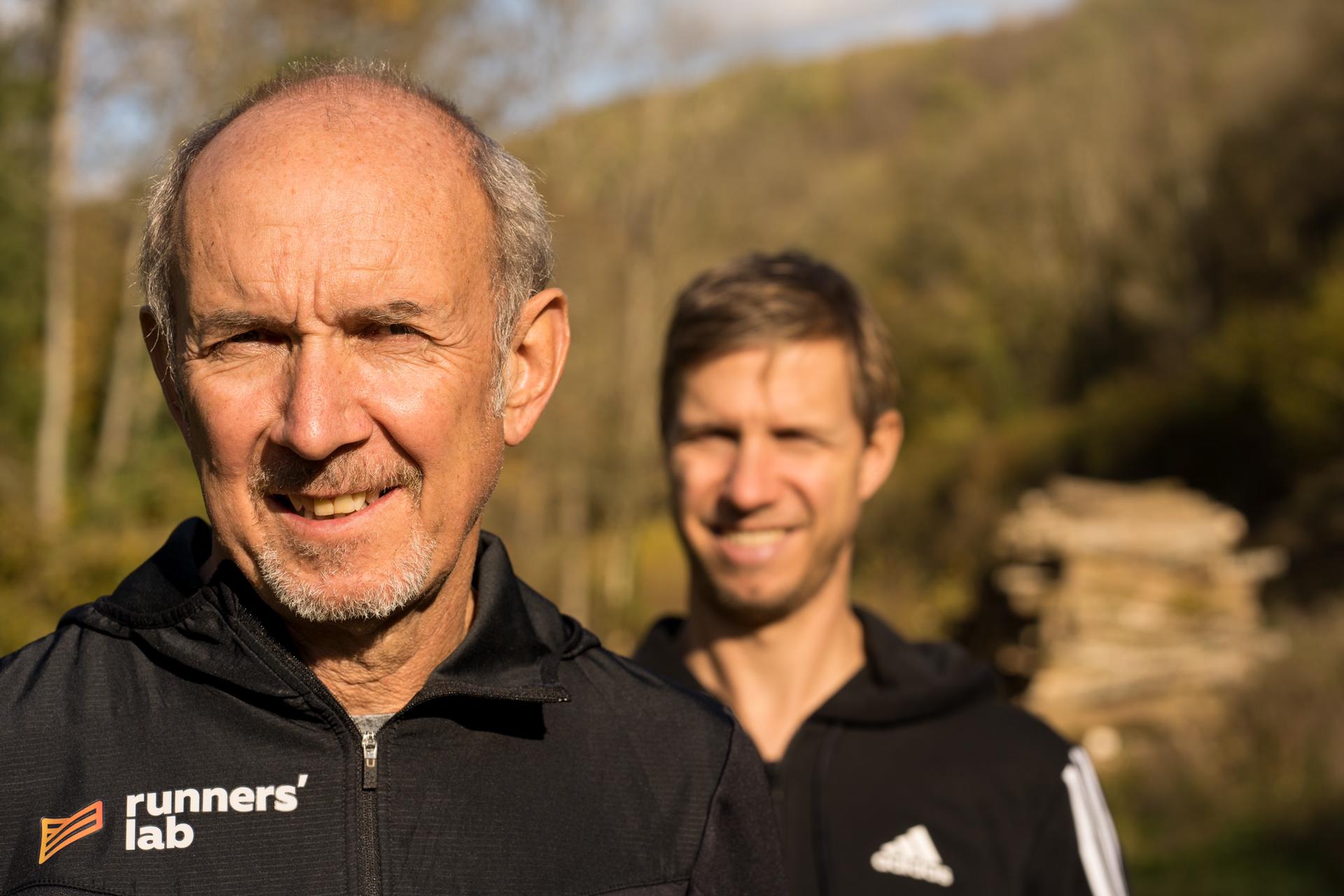 “It is remarkable that we have opened four new branches in less than ten years. That kind of growth is fantastic to see. Is it because of Koen's good policy? Perhaps that has something to do with it, but it is also thanks to our enthusiastic staff, without whom we would not be so successful. Employees who are not motivated will bring down your store. To recruit the right people, you obviously need to have a good understanding of human nature, and I would fall short in that aspect, I think. It is striking to see how much Koen and Jempi are alike. In terms of character, drive and insight, they are an exact copy of each other. Whenever they are committed to something, it must be done immediately. Sometimes I have a hard time with that, but that trait of character clearly does them no harm. Even though I did not always agree with certain things, I accepted them. You just cannot argue with a ‘Wilssens’. If those two have an argument, you better brace yourself. Fortunately, this barely happens, as Jempi wants to leave Koen free in his policy and professional affairs. He is much better at letting go”, Lut concludes.

For footscan® analysis and personal advice you are welcome in our stores. In order to serve you even better in this digital world, you can now buy your favorite running shoes online. 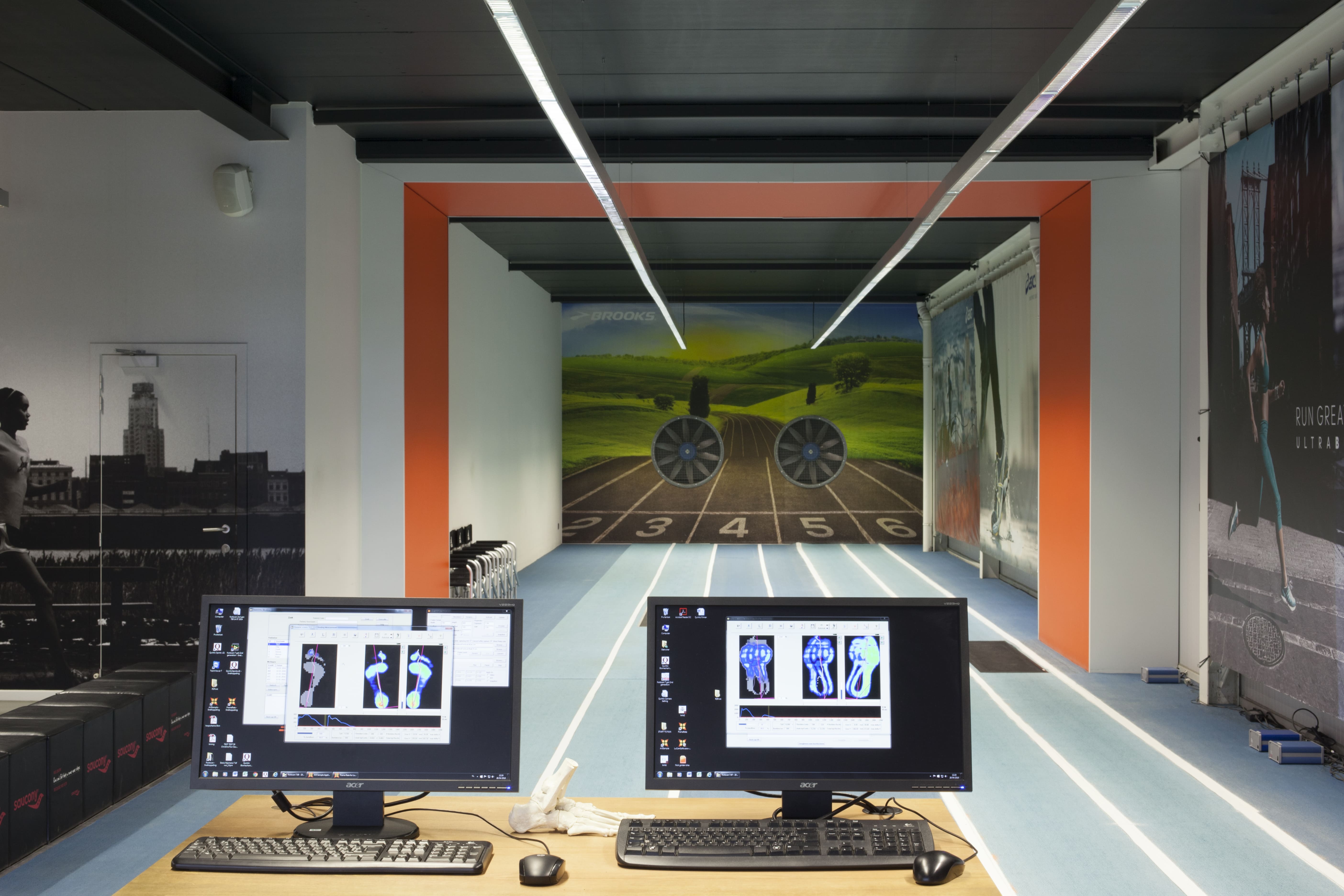 A short film about how runners' lab operates.